View from the top of Seneca Rocks.

The first weekend of May, I went to Seneca Rocks in the Monongahela National Forest in West Virginia. This is a popular area for hiking, fishing, horseback riding, and rock climbing, meaning that many people interact with the interpretive signs along the trails. 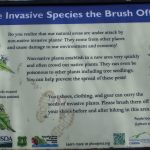 This sign was at a boot brushing station at the trailhead. What a great idea! 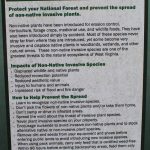 Invasive species, the most common plants people will see in human-impacted systems, are a great education opportunity. 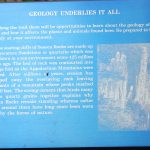 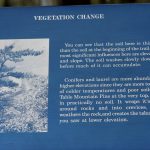 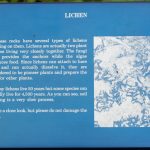 Uh oh… can you spot the error?

I was torn over whether I wanted to complete this assignment with a focus on invasive plants or geobotany. I felt that the interpretive signs for invasive plants were already pretty solid. They were colorful, had lots of pictures, and were accurate in their biology and definition of “invasive species.” The signs even engaged and empowered the reader (you can help–just wipe those boots!). Since these signs were already good, and because I spend most of my time thinking about invasive plants, I decided to go for a change of pace!

For the series of blue signs along the trail, I liked the content and the idea of taking a geobotany angle. These signs were classy looking, simple, focused, and quick to read, but could be improved with more color, photos, and–of course–more plants! I was excited to see “Lichens,” but I gasped out loud when I read that “lichens are actually two plant species living very close together.” Lichens are composed of a photosynthetic organism (alga or cyanobacteria), an ascomycete fungus (which is NOT a plant, but actually more closely related to animals!), and at least sometimes a basidomycete yeast (also a fungus). The blue signs clearly had room for improvement. 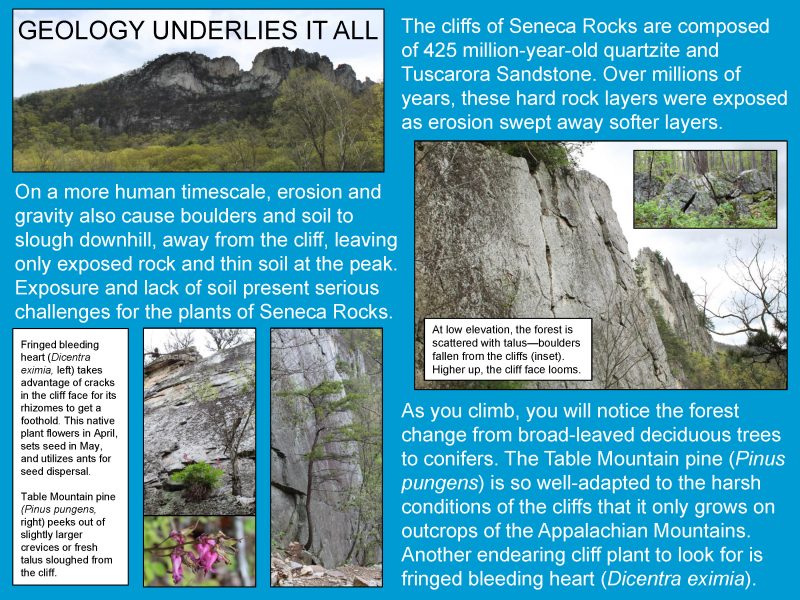 For my sign, I retained some of the cool information from “Geology Underlies it All” and “Vegetation Change” with new information on two cool cliff plants from the peak of Seneca Rocks, as well as several new images. I included a photo of Seneca Rocks from below, where you can actually see the vegetation change up the slope, from light green deciduous trees to conifers. I added some photos of the geological features referenced, a shot of the cliff face and talus. I chose images of the two plants that highlighted their cliff habitats. My sign was getting a little busy and text heavy, so I decided to not try to include any lichen info or photos. Maybe I’ll leave that project to Dr. Klips!